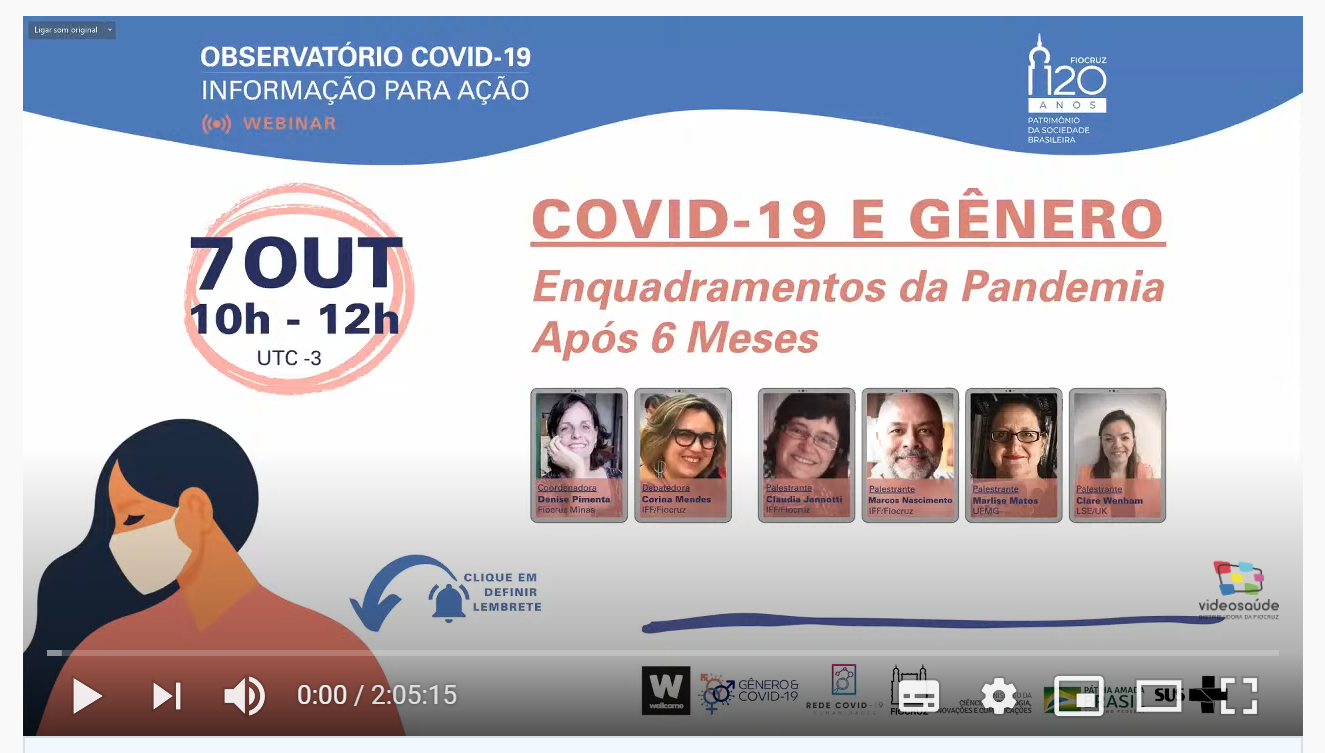 The effects of COVID-19 on work and health in Brazil

In this blog, Lynda Keeru summarizes presentations and discussions on inequity and gender that were held at the ‘COVID-19 and Gender Pandemic Framings after six months’ webinar. It explores how COVID-19 has affected violence, work and health for women and men in Brazil. It summarises the presentations from Claudia Jannotti (IFF/Fiocruz), Marcos Nascimento (IFF/Fiocruz) and Marlise Matos (UFMG).

Researchers, activists and people who work for human rights know that the social impacts brought about by COVID-19 have been especially grave on certain segments of the population. COVID-19 amplifies and provides new visibility to situations of marginalization and oppression and studying them provides an opportunity to discern their impacts on the health and dignity of these populations.

The pandemic has led to an up swell in domestic and sexual violence in homes during the pandemic. In Brazil for example, different sets of data have revealed that during the lockdown period and in the wake of social distancing, there was a reduction in the number of people reporting these crimes at the police station but there was an increase in the number of calls and military police going to homes in the wake of violence. The number of homicides against women has increased.

One research study carried out between 27 April and 11 May 2020 found that domestic work has increased with COVID-19 and there was a greater increase for black women than white women. Women are losing their jobs quicker than men and black women made up 58% of unemployed women. Many women confirmed that social isolation increased the amount of domestic violence and this is most common among women who have lower income rates, come from rural areas and among black women. This research disclosed that many states are not making information on violence available and under-reporting is low mainly because many of these cases barely ever get to the police. Violence, in this case, is not just against women but also against children and the elderly and men are the main perpetrators both in the home and also in public. Men are showing an absence of care.

In Claudia Jannotti’s presentation we heard that in Brazil the three main pillars of inequity are gender, race/ethnicity and social class. There are however other additional aspects that are important and related to the life conditions of people and groups at the intersection of several structures of inequality. Whenever several levels of inequitable and subordinating structures overlap, it’s these people who are greatly disadvantaged and lack privileges that are the most impacted by both by the viral and non-viral aspects of pandemics. There has been no exception with COVID-19.

Care is not considered essential in Brazil and this is a historical issue that stems from colonial notions that did not consider care as a form of work or labour. Care is seen as natural and as something that does not add value and therefore not socially and economically rewarded. To this end, care is devalued and considered a natural obligation and this impacts women, especially black women, the hardest.

Women’s domestic labour has increased with the pandemic; with the chores revolving around cleaning the house, taking care of the elderly and children as well as sick people. There is also the burden that comes with having a constant presence of many people in the house which increases domestic pressures that mainly fall on adult women with subsequent consequences on lifestyles and health. There is also domestic labour associated with remote labour. Besides domestic work, many women are also working for companies and other organisations from home. The combination of the two roles is arduous and it affects both the quality of the work they do as well as the mental and physical wellness of these women.

In some cases, like in the instance of female housekeepers, their jobs involve going to other people’s homes. This makes their situation even more precarious. Some were fired at the beginning of the pandemic, some of those who were not face drastic reductions in their income and many continue to work in the homes of their employer with continuous exposure to the disease. Most of these women also faced the challenge of finding appropriate childcare while they worked outside the home.

We know from the health surveillance system in Brazil that there have been disruptions to sexual and reproductive health (SRH) services with adverse effects – particularly in relation to maternal mortality – although we still lack accurate data in many realms. It is predicted that the historically high maternal deaths in Brazil will increase by 30% this year compared to last year. There are a number of case studies and testimonials from women in Brazil that explain how hard it has been for them to access sexual and reproductive health services and the insertion or removal of their IUDs which is an indication of the worsening of these services during the pandemic. At the beginning of the pandemic SRH services were not considered essential and they were actually on the brink of being called nonessential by the Ministry of Health. By June 2020, 25 percent of the legal abortion services had closed shop, were dissolved or had stopped their activities.

The high COVID-19 infection and mortality rates among men calls for closer scrutiny. It’s important to consider the potential behavioral reasons for this as this may provide more answers than the physical and physiological. There are various social barriers that drive men away from health services both in Brazil and across the world. Aspects of masculinity have not been factored in the design of service delivery for men. All this trickles down to how men were raised as boys, not just in the home but also in institutions of education. For example, messages such as, ‘face this pandemic as a man and not as a child’, ‘don’t be a coward’ are common for men. The use of war metaphors can consequently encourage ‘courageous’ rather than cautious behaviour. Labour and work is a pillar that structures masculinity and this explains why men without work/jobs feel less masculine. Many men have also struggled with the fact that most sanitation and safety measures during the pandemic require that people stay at home which is both a genuine struggle and not an option for many men.

The threats that we are facing with COVID-19 are not purely health-related. It also threatens human rights, dignity, general wellbeing and the role of gender in all of this. We need to look at this pandemic as a process and not an event and establish windows of opportunity to create an agenda for change.