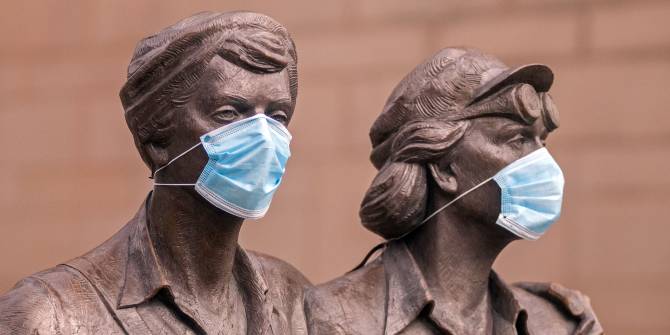 Women have been largely ignored in the COVID-19 response. This must change

Every Thursday the UK is encouraged to ‘clap for carers’ – who are far more likely to be women. Yet the government has not considered how measures such as furlough and school closures affect women disproportionately, and there is an absence of female representation at the top of government and in the COVID-19 working group. Clare Wenham (LSE) says that this needs to change as it develops an exit strategy.

COVID-19, like health emergencies before it, affects women and men differently. We know, for example, that women’s particular health needs, such as for maternity provision and sexual and reproductive health, can be affected if policymakers deem them “non-essential” during periods of crisis. We know that women endure longer lasting socio-economic effects of outbreaks, such as during Ebola, where women and girls suffered the double burden of working in sectors which were the first shut down during quarantine measures, and then remaining out of work and school for longer than their male counterparts. We also know that self-isolation leads to increased rates of domestic violence, which disproportionately are perpetrated by men against women. And we know that 70% of the frontline healthcare workforce in the UK are women, and it is among this group that we are seeing a trend of infection, and indeed mortality.

The UK government has taken steps to address these concerns: the Home Office has contributed £2m of funding for domestic violence activities, supplemented by increased support from the Ministry of Justice and Ministry of Housing, Communities and Local Government; and in a welcome U-turn, the health secretary has permitted telemedicine provision of medical abortion during lockdown periods, so that women who wish to terminate a pregnancy do not need to travel to a health clinic, risking exposure to COVID-19 infection and placing further strain on the NHS.

However, the government has not grasped the full extent of the gender implications of the COVID-19 outbreak. Recent calls for experts to advice both Parliament and the Cabinet Office listed numerous categories in which they were seeking academic expertise, but women and/or gender was missing. Similarly, the SAGE group has no explicit gender advisor, although Charlotte Watts does have significant experience in gender based-violence. To omit considerations of women, and how women may be differently affected by an outbreak, is to exclude. The concern here is that the government has not taken into account the impact of its response package on women. School closures, furlough, employment changes and the designation of essential and non-essential work will, given predominant gender norms, likely affect women differently to men. The decision to reopen construction and manufacturing sectors, which are heavily male dominated, before schools have reopened, assumes that women will be picking up this additional childcare responsibility.

There has been much discussion about the absence of women leaders in the UK’s response; that the C-19 working group is comprised of men; that the daily parliamentary briefings are dominated by men; and that female cabinet ministers, such as Priti Patel, have been notable in their absence from public-facing communications and debate. If women are missing in politics, they will probably be missing from policy too. Still – and we should not belittle the capacity of women’s representation to transform gender equality within the political landscape – representation is only half the story. We need to push for more than just women in the room, but to ensure that there are also gender advisors supporting government policy development for COVID-19.

A gender advisor might have explained that for single parents, the majority of whom are women, working at home is a fallacy, and that women should be able to self-furlough for childcare reasons, at full pay. We also know that women are more likely to be key workers, more likely to be employed in “high-risk” sectors for infection and/or to feel the need to have to work during the outbreak for economic reasons. The Treasury’s response measures do not seem to mitigate the risks to low-paid women in temporary or insecure employment, or acknowledge that pregnant healthcare workers are being asked to carry on working, despite the fact we do not know the risks involved.

These factors need to be taken seriously by the government as they develop an exit strategy. Considering the process of easing lockdown restrictions from a gendered perspective would lead to different priorities. For example, it would explicitly recognise that parents cannot return to work without ensuring that schools are open. It would consider which sectors of the economy should reopen at which stage, and which industries would be bailed out, if needed. During the financial crisis of 2008, male-dominated industries were more likely to be bailed out. But a more equitable approach this time might consider the new-found interest in the care sector, and what is going to happen to all the nurseries, care homes and respite services which will probably not survive the economic impact of COVID-19. This reconceptualisation of policy through a gender lens may seem far-fetched. But we are already seeing notable examples of it in Hawaii’s feminist economic recovery plan and in Argentina, which is pushing for a gendered crisis management strategy. The UK government should look to these examples.

We see the government praising women in care roles – the weekly “clap for carers” explicitly  recognises the paid and unpaid care which predominantly women perform within society. How can we ensure that this clapping is converted into meaningful financial recognition, and better economic security for low-paid caring roles? The UK government has implicitly prioritised the economy over the population in its response to this crisis. If that is indeed their focus, how can we ensure that men and women benefit equally from any economic savings or progress?

This blog was first published on the LSE website.