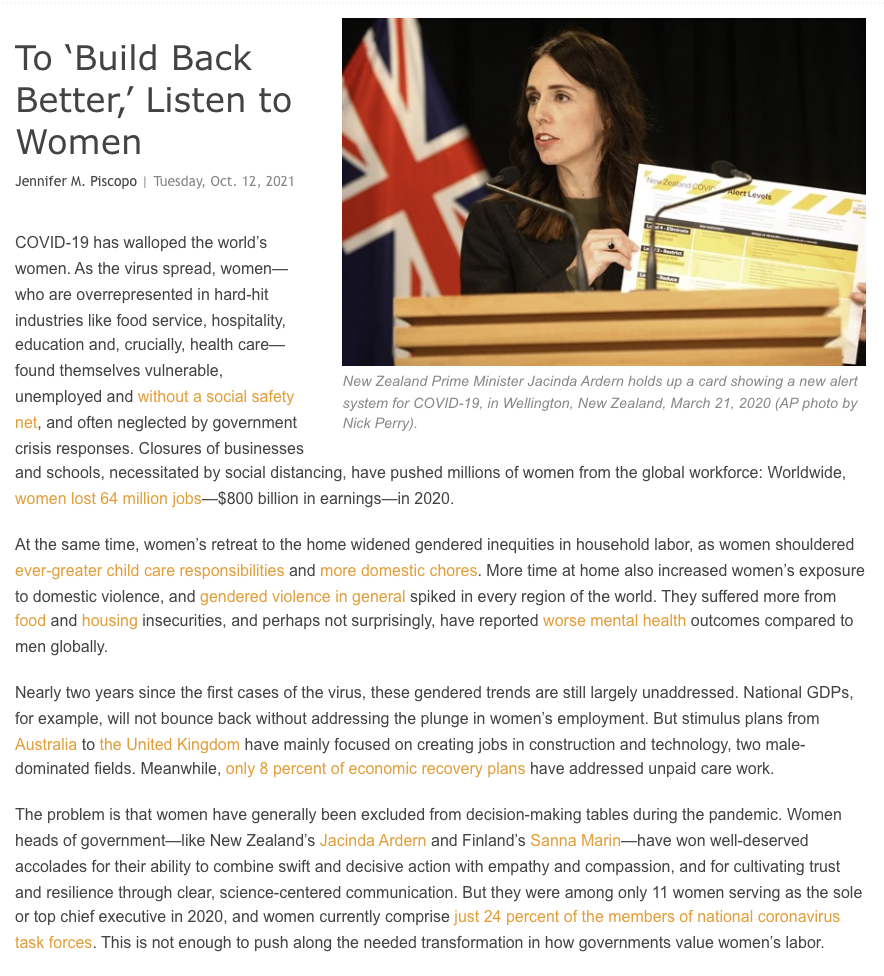 To ‘Build Back Better,’ Listen to Women

To ‘Build Back Better,’ Listen to Women

COVID-19 has walloped the world’s women. As the virus spread, women—who are overrepresented in hard-hit industries like food service, hospitality, education and, crucially, health care—found themselves vulnerable, unemployed and without a social safety net, and often neglected by government crisis responses. Closures of businesses and schools, necessitated by social distancing, have pushed millions of women from the global workforce: Worldwide, women lost 64 million jobs—$800 billion in earnings—in 2020.

At the same time, women’s retreat to the home widened gendered inequities in household labor, as women shouldered ever-greater child care responsibilities and more domestic chores. More time at home also increased women’s exposure to domestic violence, and gendered violence in general spiked in every region of the world. They suffered more from food and housing insecurities, and perhaps not surprisingly, have reported worse mental health outcomes compared to men globally.

Nearly two years since the first cases of the virus, these gendered trends are still largely unaddressed. National GDPs, for example, will not bounce back without addressing the plunge in women’s employment. But stimulus plans from Australia to the United Kingdom have mainly focused on creating jobs in construction and technology, two male-dominated fields. Meanwhile, only 8 percent of economic recovery plans have addressed unpaid care work.

The problem is that women have generally been excluded from decision-making tables during the pandemic. Women heads of government—like New Zealand’s Jacinda Ardern and Finland’s Sanna Marin—have won well-deserved accolades for their ability to combine swift and decisive action with empathy and compassion, and for cultivating trust and resilience through clear, science-centered communication. But they were among only 11 women serving as the sole or top chief executive in 2020, and women currently comprise just 24 percent of the members of national coronavirus task forces. This is not enough to push along the needed transformation in how governments value women’s labor.