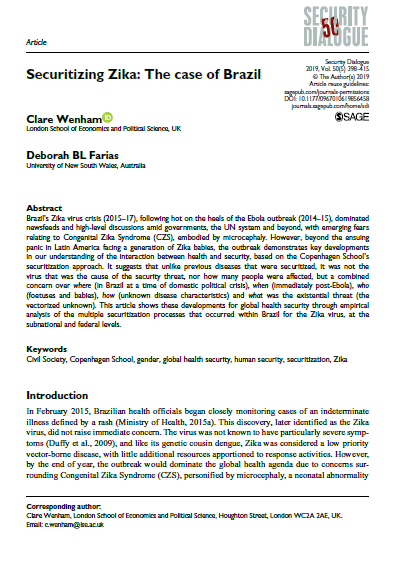 Securitizing Zika: The case of Brazil

Brazil’s Zika virus crisis (2015–17), following hot on the heels of the Ebola outbreak (2014–15), dominated newsfeeds and high-level discussions amid governments, the UN system and beyond, with emerging fears relating to Congenital Zika Syndrome (CZS), embodied by microcephaly. However, beyond the ensuing panic in Latin America facing a generation of Zika babies, the outbreak demonstrates key developments in our understanding of the interaction between health and security, based on the Copenhagen School’s securitization approach. It suggests that unlike previous diseases that were securitized, it was not the virus that was the cause of the security threat, nor how many people were affected, but a combined concern over where (in Brazil at a time of domestic political crisis), when (immediately post-Ebola), who (foetuses and babies), how (unknown disease characteristics) and what was the existential threat (the vectorized unknown). This article shows these developments for global health security through empirical analysis of the multiple securitization processes that occurred within Brazil for the Zika virus, at the subnational and federal levels.