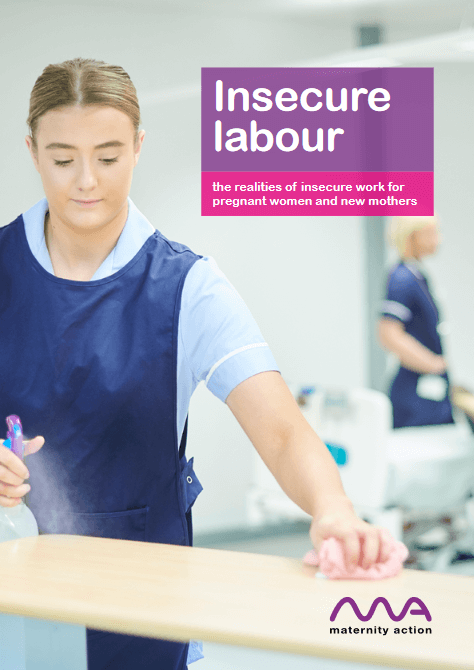 Insecure labour: The realities of insecure work for pregnant women and new mothers

Roughly one in every nine people in the UK are in insecure work, including zero hours contracts, agency working, short term contracts and some forms of self-employment.  Many industry sectors dominated by women have significantly higher rates of insecure work, such as the adult social care sector in which 24% of workers on zero hours contracts.  These higher figures are not limited to lower skilled work, with nearly half of all teaching staff in Further Education colleges employed on fixed-term, zero hours, casual or agency basis.  While often presented as a choice, a number of studies have found that lack of a secure employment options was a key reason that people entered into, and remained in, insecure work.

Insecure work has a harsh impact on pregnant women and new mothers.  Many forms of insecure work deny women basic maternity entitlements, such as maternity leave, time off for antenatal appointments, effective health and safety protections and the right to request flexible working.  Even where women do have legal entitlements, Maternity Action’s research found that women were often unwilling to exercise these rights.  Where women’s future employment is dependent on the goodwill of their employer, their negotiating position is necessarily weak.  The complexity of the legal framework exacerbates this problem, with many women, and their employers, unaware of their entitlements.

Maternity Action interviewed ten women about their experience of pregnancy and new motherhood on insecure contracts.  Women reported pressure to accept an insecure contract as the only way to access flexibility in their workplaces.  The uncertainty of short term contracts left many unable to plan a family. Women found it difficult to care for a sick child and worried about themselves becoming sick, as they were not entitled to time off for dependents, parental leave or occupational sick pay. They struggled to reconcile childcare with insecure work, often uncertain of their hours at the time they booked the nursery, but compelled to pay even if they didn’t need the care…

«Previous Post
Inter-Agency Humanitarian Evaluation on gender equality and the empowerment of women and girls»Next Post
Gender, power and progress: How norms change