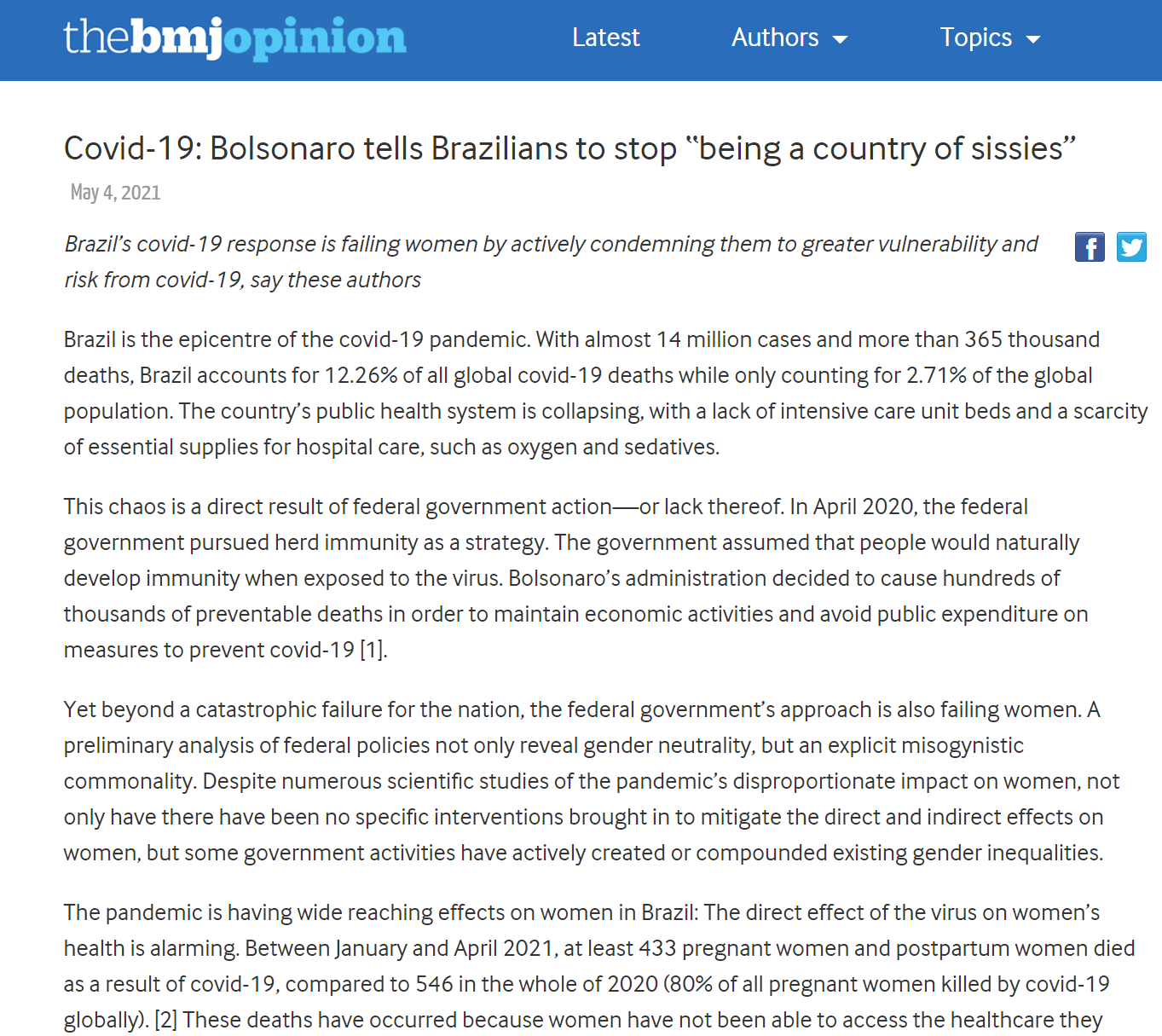 COVID-19: Bolsonaro tells Brazilians to stop “being a country of sissies”

Brazil is the epicentre of the covid-19 pandemic. With almost 14 million cases and more than 365 thousand deaths, Brazil accounts for 12.26% of all global covid-19 deaths while only counting for 2.71% of the global population. The country’s public health system is collapsing, with a lack of intensive care unit beds and a scarcity of essential supplies for hospital care, such as oxygen and sedatives.

This chaos is a direct result of federal government action—or lack thereof. In April 2020, the federal government pursued herd immunity as a strategy. The government assumed that people would naturally develop immunity when exposed to the virus. Bolsonaro’s administration decided to cause hundreds of thousands of preventable deaths in order to maintain economic activities and avoid public expenditure on measures to prevent covid-19.

Yet beyond a catastrophic failure for the nation, the federal government’s approach is also failing women. A preliminary analysis of federal policies not only reveal gender neutrality, but an explicit misogynistic commonality. Despite numerous scientific studies of the pandemic’s disproportionate impact on women, not only have there have been no specific interventions brought in to mitigate the direct and indirect effects on women, but some government activities have actively created or compounded existing gender inequalities.

The pandemic is having wide reaching effects on women in Brazil: The direct effect of the virus on women’s health is alarming. Between January and April 2021, at least 433 pregnant women and postpartum women died as a result of covid-19, compared to 546 in the whole of 2020 (80% of all pregnant women killed by covid-19 globally). These deaths have occurred because women have not been able to access the healthcare they need: one in five pregnant women and mothers did not have access to ICU, and one in three was not intubated when needed. Instead of seeking to prioritise access to these services to pregnant women, on 16 March 2021, the Ministry of Health recommended that women in Brazil postpone pregnancy, given the P1 variant is causing more severe outcomes in pregnant women, yet failed to present evidence justifying this approach.

This policy hauntingly mirrors that implemented by the Ministry of Health during a previous health emergency—Zika—whereby women were advised to postpone pregnancy due to lack of knowledge of the circulating pathogen, and its potential sequelae in newborns. Yet this decree acutely failed the women it sought to protect: it asked women to change reproductive behaviours, but continued to limit women’s access to sexual and reproductive health services. Data from 2016/7 show that those most at risk in Recife still struggled to access contraceptive services, despite these officially being free of charge in the public health system. This was due to misconceptions about having to pay for access, or because the women most at risk of Zika were unable to take the time away from work or their children to go to a health centre.  This was compounded by the continuation of restrictive abortion legislation, preventing women from terminating pregnancy.

Not only has the federal government not learned the lessons from Zika in issuing such advice [to avoid pregnancy], but this advice is particularly tone deaf when women’s access to reproductive health services has been even further restricted during covid-19, given the significant reduction of primary health services nationally.

Telling women to not get pregnant, but without providing them with the tools to postpone pregnancy is fundamentally flawed, but proves a useful tool for Bolsonaro’s administration to absolve responsibility for further deaths of women. If a woman now falls pregnant and experiences severe outcomes it would be her fault for “getting herself pregnant”. Thus, the federal government shows once again that it has no consideration for the realities of women’s lives.

This failure to consider women’s reality has been a cornerstone to the federal government’s shambolic response to covid-19. This has not just had a direct effect on women’s health, but on their livelihoods and everyday practice. Women have also carried the burden of the formal and informal care economy as nurses, community healthcare workers, mothers, teachers, and beyond. Yet, instead of seeking to support vulnerable women, the Bolsonaro administration has actively condemned women to greater vulnerability and risk, using them to reach herd immunity, and vetoing legislation to provide financial assistance to feminised sectors of the economy.

It appears gendered issues are key to Bolsonaro’s herd immunity approach, and acutely glossed over amid the toxic masculinity promoted by the president. Here men’s “bravery” is countered by women’s “vulnerability.”  This toxic language has amplified during the pandemic:  Bolsonaro condemned political opponents for having a good education or wearing tight trousers—traits which he considered feminine or homosexual. Most alarmingly, he has stated, “We have to quit being a country of sissies ” and he maintains that only the “weak” will die, a way of presenting older people, those with comorbidities, or even the LGBTQ+ community, as the only victims, or those who refused to use the “early treatment kit.”

The pandemic disproportionately affected Brazilian women suffering severe consequences of covid-19 during pregnancy, but, rather than support pregnant women to ensure their safety, or recognise the multiple sacrifices women have taken, the government ridicules them amid a broader conservative anti-gender rights ideology. Women are suffering at the hands of Bolsonaro, and the effects of such complicit anti-gender equality strategy will be felt for many generations.