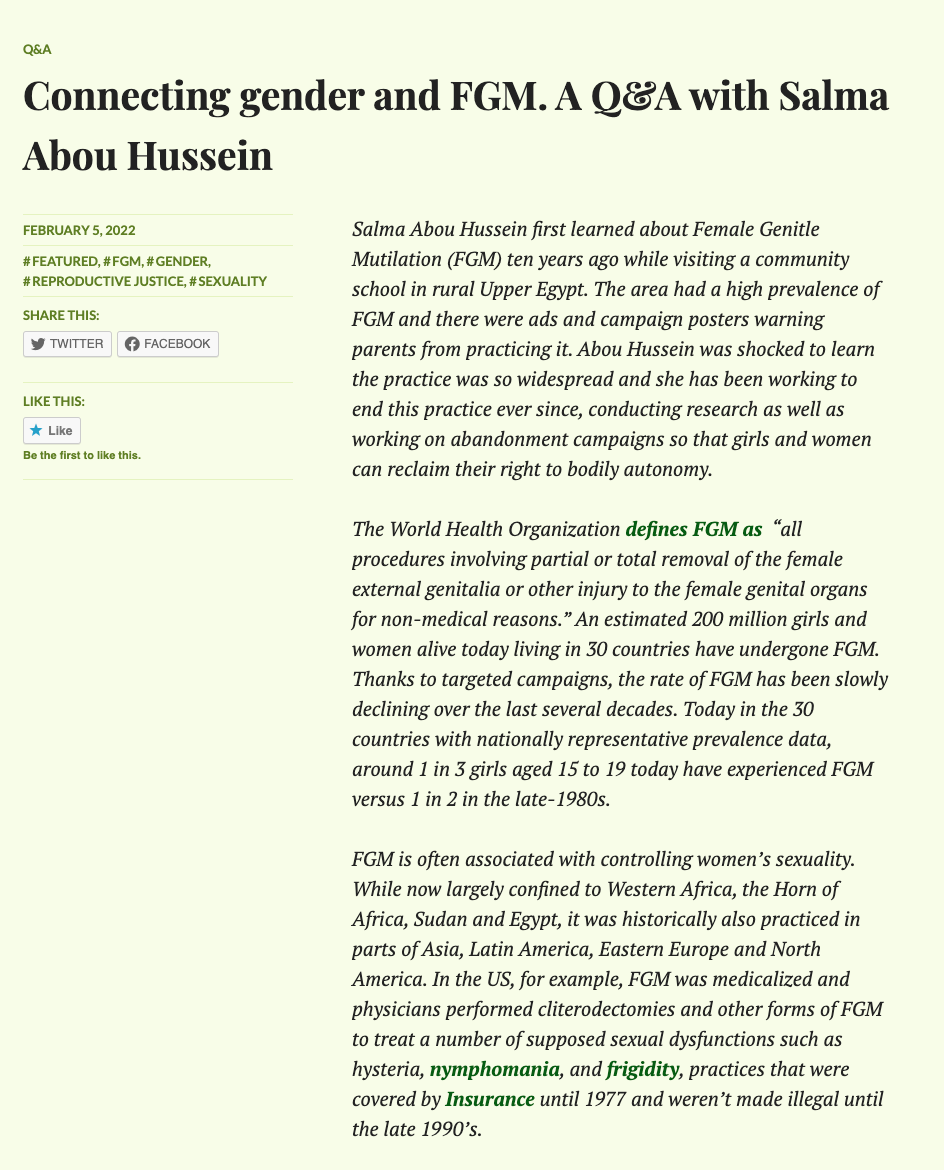 Connecting gender and FGM. A Q&A with Salma Abou Hussein

Salma Abou Hussein first learned about Female Genitle Mutilation (FGM) ten years ago while visiting a community school in rural Upper Egypt. The area had a high prevalence of FGM and there were ads and campaign posters warning parents from practicing it. Abou Hussein was shocked to learn the practice was so widespread and she has been working to end this practice ever since, conducting research as well as working on abandonment campaigns so that girls and women can reclaim their right to bodily autonomy.

The World Health Organization defines FGM as  “all procedures involving partial or total removal of the female external genitalia or other injury to the female genital organs for non-medical reasons.” An estimated 200 million girls and women alive today living in 30 countries have undergone FGM. Thanks to targeted campaigns, the rate of FGM has been slowly declining over the last several decades. Today in the 30 countries with nationally representative prevalence data, around 1 in 3 girls aged 15 to 19 today have experienced FGM versus 1 in 2 in the late-1980s.

FGM is often associated with controlling women’s sexuality. While now largely confined to Western Africa, the Horn of Africa, Sudan and Egypt, it was historically also practiced in parts of Asia, Latin America, Eastern Europe and North America. In the US, for example, FGM was medicalized and physicians performed cliterodectomies and other forms of FGM to treat a number of supposed sexual dysfunctions such as hysteria, nymphomania, and frigidity, practices that were covered by Insurance until 1977 and weren’t made illegal until the late 1990’s.

February 6 is International Day of Zero Tolerance for Female Genital Mutilation. Yarrow Global caught up with Abou Hussein to learn about her work and research, and talk about the connection between gender,FGM, and the control of women’s sexuality.

«Previous Post
Gender equality and COVID-19: act now before it is too late»Next Post
Innovating in a Pandemic: Gender and youth equity amid COVID-19