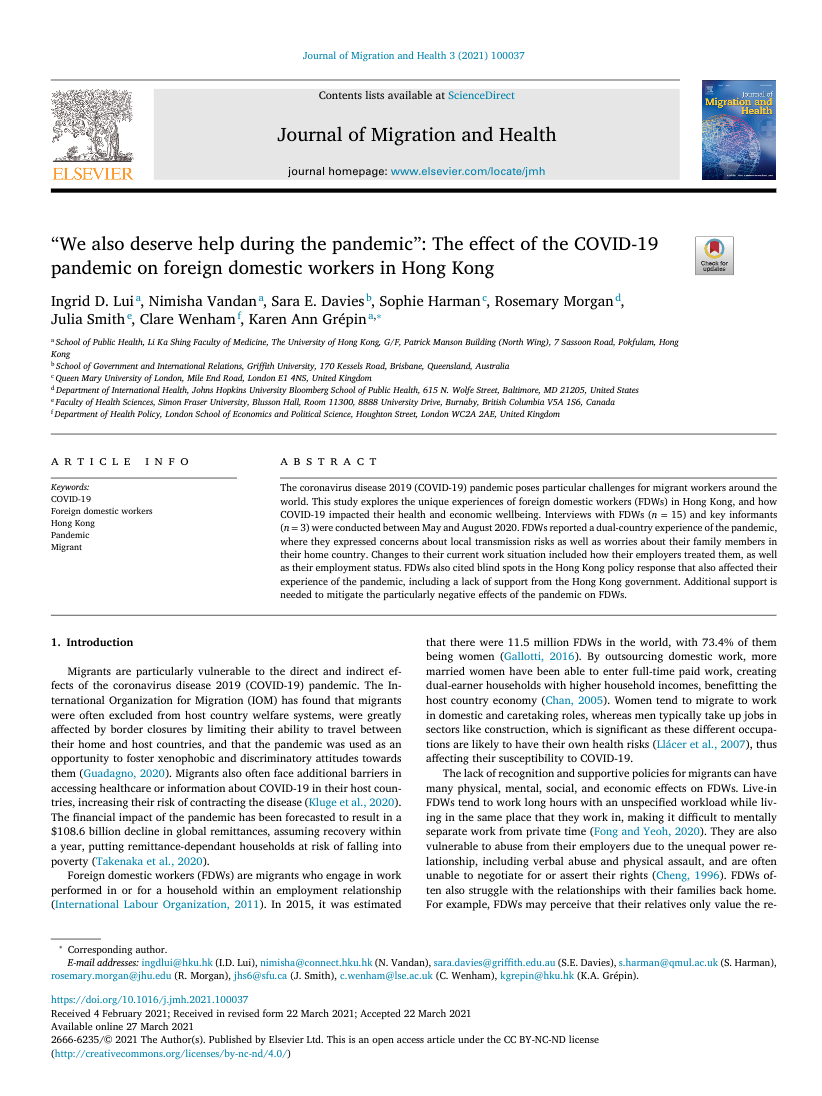 Written By Ingrid Lui and Karen A. Grépin, the University of Hong Kong

Many of the foreign domestic workers we interviewed felt that they lacked adequate protection and support from the Hong Kong government, with many relying on assistance from community members and organisations instead. They also reported experiencing prejudice and discrimination from the wider Hong Kong society. These views may have been exacerbated by the government, who drew public attention to foreign domestic workers for their supposed lack of compliance to anti-epidemic measures. For example, the government issued multiple recommendations that these workers should stay at home on their rest day to prevent the spread of Covid-19, citing foreign domestic workers’ tendency to gather in large groups. This messaging was potentially inflammatory and also failed to consider the importance of the one day per week these workers are able to spend time away from their workplace and socialise with community members.

Foreign domestic workers are not the only occupational group in Hong Kong to be subject to mandatory testing. Unlike other groups for whom testing has been made a requirement due to the riskiness of their jobs (eg restaurant workers or teachers), the rationale given by government officials for the imposition of these mandates on foreign domestic workers was due to the perception of the riskiness of their behaviours outside of work on their rest days. More specifically, even though foreign domestic workers spend most of their week at home with minimal social contact, the government seems to believe that they are at a higher risk of contracting and transmitting Covid-19 because many can be seen gathering with their friends in large groups on their one day off. It should also be noted that many much higher risk groups (eg, health workers) are not currently subject to mandatory testing in Hong Kong.

The foreign domestic worker community and some members of the general public have reacted with anger, calling the policies discriminatory and racist. As our initial study found, foreign domestic workers have already been disproportionately affected by the Hong Kong government’s anti-epidemic policies and society’s discriminatory attitudes, and they were not given adequate support or access to necessary resources. Recently, we held a webinar in collaboration with local foreign domestic worker groups and medical professionals to discuss the vaccination programme and address common concerns in the community. Based on the strong turnout we received, many foreign domestic workers have shown that they are already willing to seek out health information on their own and understand the importance of testing and vaccination, contrary to the number of restrictions imposed on them and reminders issued by the government. The Hong Kong government therefore needs to adopt more supportive policies that are based on the needs and lived experiences of foreign domestic workers, rather than their own perceptions and stereotypes of this group.