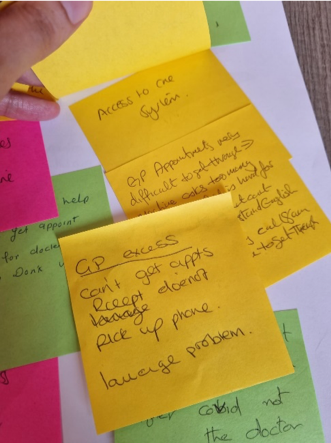 We have been working on issues related to care, caring and carers during COVID-19, as part of the CoPower: Consortium on Practices of Well-being and Resilience in BAME Families and Communities, funded by UKRI. Shirin Rai led the research team. Dr Shahnaz Akhter and Dr Jayanthi Lingham carried out the narrative interviews that form the basis of our work. We have examined how COVID-19 (the pandemic and lockdowns) affected older people receiving care as well as their paid and unpaid carers thus triangulating the care chains within Black, Asian and Minority Ethnic families and communities in two Midland cities in the UK[1].

To discuss our findings with our participants, we met with three groups of older people and carers, paid and unpaid together with four community organisations in two cities over two days. In Coventry, we were hosted by the Ekta-Unity who work with South Asian women and Carers UK, Coventry; in Leicester we met Women4Change and Highfields Community Association. The venues were familiar because we have been working with all three groups to understand the impact of Covid-19 for care, caring and carers.

We wanted to speak with our research participants about the ‘policy recommendations’ that we wanted to put forward to the local and national government. We had put together three questions – 1) how can care be organized and funded paying attention to the needs of minoritized communities? 2) why is valuing care important and what should valuing care mean? And 3) how can the experiences of COVID-19 provide insights into the importance of treating everyone fairly? Building on our workshop in Coventry, in Leicester we asked participants just one question: “Imagine two government representatives are here at the workshop: a local government official and a national government member. They tell you, “We want to value care.” What would you tell them that you and your communities need?”

We spoke in Potwari, Hindi, English and Punjabi, slipping from one to the other depending on who was speaking and also had the support of Gujarati and Somali interpreters in Leicester. In Coventry, translation and hearing were issues that came up immediately – which language should Shahnaz speak in? Her Punjabi was more Potwari; Shirin’s Punjabi was almost non-existent but her Hindi was understood by many Punjabi and Gujarati speakers, so we muddled through.

After briefly telling the groups what we had been doing, and what our research findings were, we divided them into groups and asked them to broadly discuss our questions. We had not anticipated the wide range of issues that came up, not all of which had been addressed in the individual interviews that we had conducted. The following were the recommendations that they put forward with, it has to be noted, not much optimism or hope of seeing these realised.

It is clear that in both locations older women suffer from anxiety about their health, and that their access to health services is patchy, which adds to stress. Most of them had complaints about access to their GPs; many thought that COVID-19 had become an excuse not to address this issue. Two separate but connected issues were raised in this regard – a) the telephonic system of making appointments (or worse, being told to do this online) and the language barriers to easy communication with their doctor and the surgery. ‘They tell us to call at 8am, we are hanging on the phone for ever; when someone finally answers the phone they tell us there are no appointment slots left – even though it is only quarter past 8 then’ was the general experience of the women. And b) that ‘the receptionist can’t understand us and we cannot understand them. Also, when the doctor calls on the phone we cannot explain our troubles clearly. Why can we not see someone face to face; why can we not have receptionists speaking our language?’ So, what they want is restoration of face to face appointments with their GPs – ‘if dentists can be seen face to face, why can’t GPs?’ – and receptionists who can speak their language.  The online GP booking system also brings into focus older people’s access to digital communication, and the requirement for those who access this, to be able to read English.

Despite a public discourse of ‘Asian look after their own’ and governmental endorsement of this perception, for some ‘the extended family is over’ and they want the government to recognise it and support minoritized families. The complaint was that the government continues to believe that Asian families are extended families – and look after their own. There is no awareness of how Asian families, like all families, are changing, indeed, have changed because of employment, mobility and changing values, and therefore need help, support and attention. For example, one lady said, ‘why are there no day care centres, designated nursing homes for us? Where we can get designated nursing homes, which feel comfortable for us?’ Not all felt that of course, but seven out of ten women sitting at Table 2 in Coventry lived alone or with their husbands, and not with their children. Of those who lived separate from their children, some did not have children who lived in the city and others wanted to live independently. Employment related mobility, second or third generation social change, mixed marriages have all contributed to the decline of the extended families in the South Asian communities. We have little data on this as the ONS data on families does not cover this aspect[2]. During COVID-19, not seeing their children was difficult for most of the women, but also difficult was not to be able to ask for their help with practical details of everyday living – paying bills, calling the doctor, negotiating with the Council. Most older people wanted to participate in social events and networks on a regular basis for which they need support.

We learnt that mobility and mental health are deeply connected. Coming to weekly yoga classes and meeting other women who speak the same language, belong to the same community and like the same food, was an important mitigating factor for them; they did not want to stay in their homes – they wanted to feel part of a community for which travelling across the city to the venue was not easy! They wanted this access to the wider world even more after the isolation they had experienced during the COVID-19 lockdowns. One lady had forgotten to put on her spectacles – ‘my son was rushing me because he had to go somewhere after dropping me here, so I forgot to put them on and now I cannot see much. Otherwise, I would have had to change two buses to get here’. The ladies wanted support with mobility – the EKTA- Unity to provide a pick-up bus to bring them to the Centre; they did not want to be dependent on their children for their social life. Carers wanted their travel to their clients reasonably paid, and their work to be concentrated in smaller areas so that their travel minimizes costs – both economic and in terms of physical tiredness and mental stress of travelling under pressure of time.

Recognise carers and the importance of their work – better supported carers are better carers was the message from the carers – both paid and unpaid. Also highlighted was how the intensity of caring combined with lack of material and psychological support significantly affects carers’ mental health. Unpaid carers wanted their work to be recognised through improved carers’ allowance – as Fatimah Li, Senior Support Worker from Highfields Centre in Leicester commented, ‘how is it fair to be paid £75 for 35 hours of work?’ – and easier access to resources for which they needed information to be accessible. Paid carers wanted better pay per hour that took into account extensive travel time, –– an end to zero-hour contracts, support for upskilling through funding pursuing higher qualifications, and the right to unionise so that they could fight for their rights. As part of the recognition of the importance of care work, the Women4Change group also demanded that outsourcing of care work needs to stop. Care companies that provide care for profit always undercut worker rights, provide minimal resources and pay the least, and undermine unionisation. Both groups of carers wanted support for mental health issues that they face and the people they care for face. The importance of this support had become ever more evident through the COVID-19 lockdowns. For both groups of carers, and for the community at large, the message was that rights are important – ‘know your rights’ – so that individuals are not scared to raise complaints when needed. All this was of course made more urgent with the cost of living crisis, which is affecting everyone.

The governance of care in the UK is a shambles, was also the message. Three aspects of governance were discussed: a) lack of joined up information and support – different sources of information from different government organisations generate gaps, anxiety about filling different forms, language issues compound this anxiety, and unscrupulous people take advantage of this by charging exorbitant sums for filling in forms. This led to some carers asking for more regulation of the sector not less and for an end to austerity affecting local councils. There was a demand for a face to face ‘under one roof’ provision of care resources, like the Citizens Advice. b) There was also cynicism about elected representatives – across the board older people and carers felt overlooked by the local councillors and MPs, which they said led to communities being disengaged – ‘I feel defeated’ said one carer, and ‘we are no one’ said another. There was a need for councillors to engage with communities, to tell them what they do and when people are in need who to contact and where to go. Finally, c) the community organisations as the conduit between government and minoritized groups of older people and their carers want and need to be better supported. The assumption has been made that they will pick up the gaps left in community care by the withdrawal of government funding; but they too are depleted and in urgent need of resources. This would also allow for local community organisations to work better with the government and other community organisations to empower their communities.

Will these recommendations find receptive ears in government? There was cynicism and distrust regarding the government – Partygate came up in relation with the narrative of ‘no one cares’ as did the continuing underfunding of local councils. But there was also enthusiasm for community engagement and mobilisation. If the long-term institutional racism compounded by COVID-19 is to be challenged, the message from older people and their paid and unpaid carers from minoritized communities is that there has to be more culturally sensitive investment in the care sector, and also that minoritized communities must be able to organise themselves to raise their voices against discrimination, through working with better resourced community organisations.

[1] . While the Consortium had initially used the term BAME, this term has since been not only contested but has also been acknowledged even by the UK government to be not fit for purpose. In this paper we use the term ‘minoritized communities’ or ‘racialised communities’ instead.