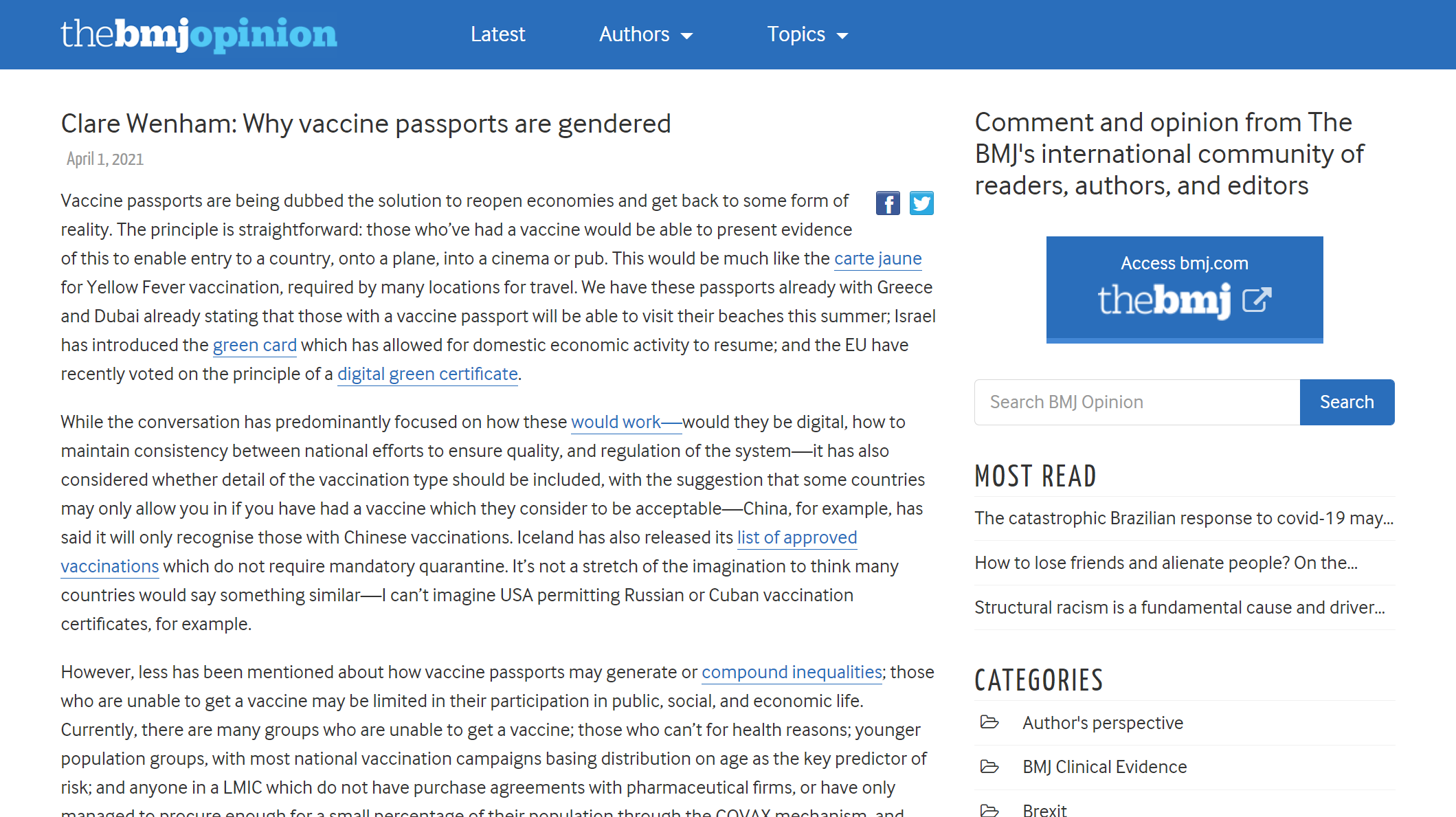 Why vaccine passports are gendered

Vaccine passports are being dubbed the solution to reopen economies and get back to some form of reality. The principle is straightforward: those who’ve had a vaccine would be able to present evidence of this to enable entry to a country, onto a plane, into a cinema or pub. This would be much like the carte jaune for Yellow Fever vaccination, required by many locations for travel. We have these passports already with Greece and Dubai already stating that those with a vaccine passport will be able to visit their beaches this summer; Israel has introduced the green card which has allowed for domestic economic activity to resume; and the EU have recently voted on the principle of a digital green certificate.

While the conversation has predominantly focused on how these would work—would they be digital, how to maintain consistency between national efforts to ensure quality, and regulation of the system—it has also considered whether detail of the vaccination type should be included, with the suggestion that some countries may only allow you in if you have had a vaccine which they consider to be acceptable—China, for example, has said it will only recognise those with Chinese vaccinations. Iceland has also released its list of approved vaccinations which do not require mandatory quarantine. It’s not a stretch of the imagination to think many countries would say something similar—I can’t imagine USA permitting Russian or Cuban vaccination certificates, for example.

However, less has been mentioned about how vaccine passports may generate or compound inequalities; those who are unable to get a vaccine may be limited in their participation in public, social, and economic life. Currently, there are many groups who are unable to get a vaccine; those who can’t for health reasons; younger population groups, with most national vaccination campaigns basing distribution on age as the key predictor of risk; and anyone in a LMIC which do not have purchase agreements with pharmaceutical firms, or have only managed to procure enough for a small percentage of their population through the COVAX mechanism, and therefore will be many years before a widespread national rollout is possible. Requiring a vaccine passport will exclude these groups—and if history of public health has told us anything, excluding people based on their health status is dangerous, and ethically reprehensible.

We also must consider the gendered effects of such a policy intervention: covid-19 has shown us time and time again, that gender neutral policy focused exclusively on epidemiological decision making, expects that women will bear the brunt of changes to life, and will absorb the additional labour. Vaccine passports are no exception: introducing vaccine passports will limit women’s public opportunities and further entrench the gendered norms of men at work and women in the home which have been compounded over the last year.

Firstly, pregnant women are currently ineligible for vaccination in many parts of the world. This in turn means that without a vaccine passport, a proportion of women will be unable to return to “routine” life at the same rate as their non-pregnant counterparts. Last year 464,000 children were born in the UK, taking into account twins, that still leaves a lot of women excluded from this policy aimed at getting life back to normal. Pregnant women have already been discriminated against with furlough regulations, as maternity leave was not counted towards their routine work contributions in the previous three years, meaning they were ineligible for the same amount of money.

Secondly, we know that children are currently not part of any national vaccination strategies globally, although there are encouraging trials being undertaken, such as by Astra Zeneca, and so this may change. However, if vaccination passports come into effect, children will be excluded from accessing these passports, which in turn will limit their participation in public life. As women disproportionately absorb childcare within households (and society more broadly) this means that women’s civic and public participation will be limited—if women are with children who can’t go into public spaces, they won’t be either. This might lead to a situation which further distinguishes the public/private divide, with pubs and planes filled disproportionately with men.

Thirdly, there is some evidence to suggest that women are slightly more hesitant to get a vaccine than men. While the aim of the passport is to “nudge” individuals to get vaccinated for the good of reaching “herd immunity,” there will be more women than men who do not wish to do so, for whatever reason. Requiring a passport for these women to return to work, life, and travel, will then put more women than men into a difficult position as to what decision to make.

Given most of the last year has seen a natural experiment in how gender norms become more greatly entrenched during crises and the gendered realities in our society, we should think twice before introducing policies which will create further inequalities in our societies. Moreover, given the requirement of an equality impact assessment of all new policy in the UK, it is important that this is given due consideration prior to pushing ahead—the “tyranny of the urgent” to resume economic life should not be at the cost of women’s ability to participate in public life.

«Previous Post
Gender, race, and health workers in the COVID-19 pandemic»Next Post
Lessons from the past: protecting women and girls from violence during COVID-19